Elona wrote this piece for Open Democracy ‘Transformation’ project series on care, 29 October 2019 – with thanks to the editors for the invitation to contribute, you can see the original publication on their website.

In a re-converted industrial building in East London, a regular session of ‘Community Massage’ is taking place. A friend tells me, “that could sound creepy!” I laugh and explain that it’s a collective of trained therapists who organise treatment on a sliding scale for a range of people including activists and those who can’t afford complementary therapy.

They organise the sessions as members of The Common House, a self-organised social and cultural space set-up to challenge the social, economic and environmental injustices that are created by capitalism and the oppressive forces that come with it.

Another friend who’s involved with a different group at The Common House tells me that “it wouldn’t be clear to a lot of people how community massage could be understood as a political and even anti-capitalist activity.” Yet it is well understood by those who co-run the space that such activities are about cultivating a sense of care that enables people to survive social injustices.

Survival can be enough, but we also know that healing practices, peer support groups, film screenings, workshops, being able to cook food in a safe space, or providing childcare for activists can enable people to get involved in organising for social change. “I guess this comes back to quite a fundamental idea in feminist politics,” my friend continued, “making the personal political.”

I was recently invited to contribute to a conversation at the Fabrica Gallery in Brighton inspired by an exhibition called Care(less) by artist Lindsay Seers. The immersive installation was commissioned as part of an OPCARE research project designed to investigate the impacts on older people of having to self-fund their care in the UK as a result of successive funding cuts since 2009.

Indeed, the burden of spending cuts for social care in the UK falls disproportionately on adults over the age of 65. Less funding means fewer professionals to do care work (from help with everyday tasks to more personal care), and also higher thresholds for accessing publicly-funded care. Lorenza Ippolito (the facilitator of the conversation) and I were interested in asking: how is care understood in this context?

What the exhibition makes clear is that models of social service provision that have been developed at the meeting point of neo-liberalism and austerity policies imply that care is something that individuals should organise by and for themselves. It also shows how care is seen mainly as a financial transaction, abstracted from its social and material contexts.

Such an understanding of care is precisely what feminists have been challenging since the 1980s in work by feminist authors of colour such as Audre Lorde, bell hooks and Gloria Anzaldúa. Carol Gilligan’s writing on a feminist ethics of care has also been inspirational for many scholar-activists.

However, this was not how I first came to think of feminism and care myself. In fact, growing up as a white woman in France, I didn’t proclaim myself a feminist until relatively recently. The row over French female celebrities’ critiques of the #MeToo movement for – in their eyes – condoning ‘puritanism’ and ‘male hatred’ perhaps gives a hint to why this was the case.

Feminists who actively criticise mainstream society in this way continue to be portrayed as ‘extreme.’ Just notice the continued use of the term ‘feminazi’ that was popularised in the USA in the 1990s to discredit feminist practices, or activist-scholar Sara Ahmed’s serious yet ironic call for feminists to be ‘killjoys.’ 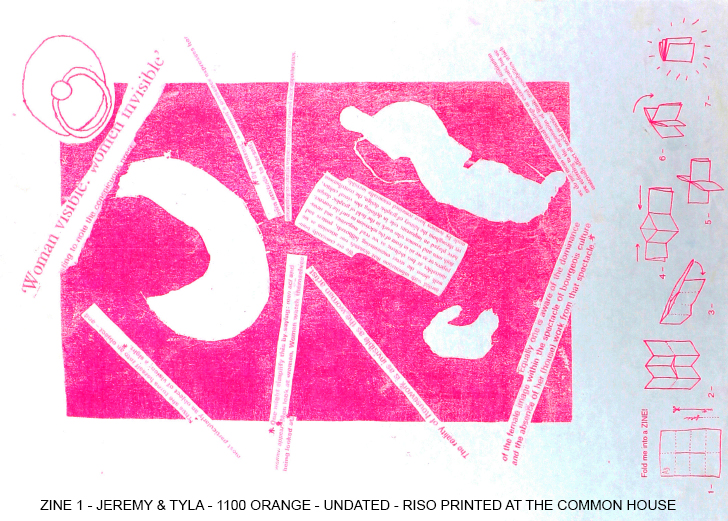 Although very different in nature, both The Common House and Les Grands Voisins in Paris, with whom I also work (a temporary transformation of an old hospital that explores different ways of living in cities), are projects that create spaces for being ‘in common with difference’ and experiment with ways of doing everyday politics that challenge mainstream individualistic, patriarchal and consumerist European culture. Feminism and care are central to these experiments.

The kinds of approaches to care practiced in these projects can be seen as feminist in three ways. First, care is practiced through social relationships, not as an individual transaction; second, care recognises the connections that exist between the personal and the structural – between our embodied experiences and the cultural norms, institutions and policies that govern support for care and caring; and third, care always involves relations of power.

In my experience with Les Grand Voisins I’ve witnessed and taken part in many different care practices that I would call feminist in this sense. For over two years, the old hospital site was home not only to people living in emergency social housing, social workers, artists and professionals working on alternative and solidarity-based economies, but also to chickens, several bee colonies, tools, wood for building modular furniture, pigeons, rose bushes, greenhouses, sewing machines and a turtle, to name but a few.

Members of the project, including individuals who might be defined as vulnerable in certain contexts, cared for the chickens. The chickens brought joy to those living and working on site and to visitors. They laid eggs that were carefully prepared into food. When the project could no longer host the chickens, a new home was found.

As this example shows, care isn’t a one-way practice restricted to caring for some-one or some-thing; it involves mutuality, and it happens in relationship. This isn’t always easy. As everyone knows from family life, ties of obligation and attention can be difficult, painstaking and even unwanted. But when care is practiced as something collective the weight of care can be shared: it’s not just one person’s responsibility.

That’s important because not everyone is in the same position to take up shared responsibilities for caring in terms of their gender, sexuality, ethnic identity, class and abilities; in other words, it’s vital that we recognise the intersectional nature of any care practice. In The Common House we operate a sliding scale for membership, and while most of the groups that organise in the space provide food during meetings, they don’t expect everyone to do so.

Everyday practices of care are intimately connected to structural violence in the form of racism, sexism and natural resource extraction. Caring as a feminist is a way to reduce dependency on exploitative economic relationships, but it also creates moments of mutuality, kinship and solidarity. This in turn can increase collective capacity and people’s ability to contribute to transformational politics.

Yet even in places like The Common House or Les Grands Voisins, care can become a burden that falls heavily on the shoulders of a few individuals. Or the need for self-care might become an individualised practice divorced from a collective context, thus reproducing the kinds of economies these projects are trying to challenge.

It is this potential for ideas of care to slip back into individualistic and exploitative relationships that the Care(less) exhibition attempts to highlight. Feminist perspectives show that the political dimensions of care can be easily forgotten or wilfully dismissed. To counter this danger, they always ask: who and what is being cared for, and to whose benefit?

A few months ago I went into a library in Paris and asked if there were any science fiction books by francophone authors written from a feminist perspective. A young female librarian showed me a few publications, and I commented that most of them were historical science-fiction and fantasy novels. Her response was that “feminists in our society have already achieved emancipation,” and so “it is more relevant to bring to light hidden or forgotten histories.” I was so taken aback that I didn’t even know how to respond.

Retelling herstories is an important radical practice, but feminism is not a thing of the past. Practices of care don’t have to be labelled as feminist for us to claim and reclaim care as feminist praxis.

Thanks to Lorenza Ippolito for inviting me to contribute to the conversation piece at Fabrica, my comrades at The Common House and Les Grands Voisins, and doctoral companions for formative feminist conversations.

This site uses Akismet to reduce spam. Learn how your comment data is processed.

Try your luck, choose a tag